Before I started writing grants for local nonprofits, I didn’t even know what a grant writer was. What exactly does one do? How is writing involved? Wait… what’s a grant? Well, that was just ten years ago and now I am so glad that I busted through that wall!

It all started because I love cats. Yes, that was me posting pictures of my four-legged babies on Facebook and watching all the hilarious videos I could find. I was also fostering cats for Animal Shelter Relief, a local rescue organization, when they announced at a volunteer party that they were going to start applying for grants. I’d been looking for something that I could do from the comfort of my home (so I’d have more time with my cats, of course) and for some reason, the thought of writing grants stuck in my head. While Amy was still talking, I leaned over to my husband Andy, who is very smart, and whispered, “do you think I could do that?” He nodded reassuringly, which told me he either really believed in me or just wanted to look supportive, “Yes dear, of course you can.” Well, I thought about it for a while – a few weeks or so – and then told Amy, ASR’s president that I’d like to give it a try. She was ecstatic at the prospect of having a volunteer actually step up!

Me with my foster, Ginger. Ain’t she sweet?

Of course, this is where that wall of incomprehension stood in my way. I had no idea what grant writing even was. I knew it involved getting money at the end, so that was a plus. But beyond that, I was clueless. So, after some preliminary research online to help me know what a grant writer was, I found an online class at Cabrillo, all about writing grants. So, I enrolled! In fact, I took three classes through Cabrillo to learn the basics of writing grants. I learned a ton, but have learned so much more since then. By the end of 2010, I had some education under my belt and was now ready to tackle actually applying for some grants for ASR.

But, I didn’t get very far that year. In fact, I had a grand total of 0 grants funded. I chalked it up to my inexperience and the economic downturn, which was still in full-swing. But, honestly I was a bit discouraged.

One great thing happened that year, though. After posting on Facebook that I was starting to write grants, a good friend, who also happened to be the President of the Scotts Valley Ed Foundation, commented that she and I needed to talk. This one post led to another organization allowing me to practice on them and hone my skills. And it was a new area – education! Another great opportunity to learn and get better.

2012 was much more successful. I actually started winning a few small grants. I was ecstatic! You just can’t measure how much a few small successes will keep you going. I continued to write, submit and even win a few through the next few years. I even gained a third organization – Four Paws to Love, a new animal rescue – yay, more cats! Andy was not at all surprised. It turns out; he really did believe I could write grants!

My super-smart hubby, Andy. He loves cats, too.

Then in early 2015 I decided it was time to start trying to make a real business out of my endeavor. It was hard because I was still working full-time and over the hill, but I needed to find a few paying clients. I was able to spend some time calling nonprofits in Santa Cruz, meeting with great leaders, and attending a few mixers in the area. Those were the most fun for me. It turns out I love meeting new people at parties! It was very slow progress but I was at least developing a brand and getting my name out there. Meeting people who were actually making a difference was so exciting! They were all inspiring and kept me going as I began to realize what I was doing could be really worthwhile. 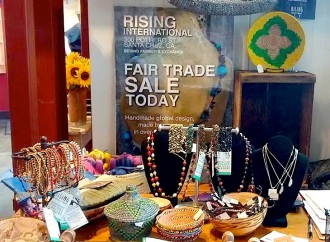 One of the organizations that has inspired me so much.

I had another major event happen in 2015. In early May, I was laid off from my long-time corporate job. I was shocked and even a little angry at the rejection. That lasted about a day. After a good weekend of processing it with family and friends, I had my first day in my new life and I have never looked back.

With my newfound freedom, I had more time than I could ever hope for to cultivate new relationships, write more grants, and really develop my new business. I truly consider my lay-off a blessing and even an affirmation that I was on the right track with my goals. God was looking out for me and giving me a real opportunity to shine – and I would not let Him down!

On my way to the Santa Cruz Chamber Women in Business Hat and Pearls Luncheon.

Since then I have continued to hone my skills, have had many clients (all inspirational organizations doing great work for their causes), and have continued to build my business one step at a time. So much for having more time than I could ever hope for! I love my life and what I do and I am excited for the future. I learn new things all the time and feel like I’m actually helping people, both of which are passions of mine. Grant-Writing is a great field for me and I hope to be able to do it for years to come. Mostly, I’m excited to see how my efforts help my clients (both paying and continued pro-bono) to grow and achieve their goals. Together I think we really can save the world!

2 thoughts on “Where did this TreasureHunt Grants come from?”